The City of Bainbridge Island is planning to build a Police and Municipal Court replacement facility. For more than 20 years, Police and Municipal Court staff have worked in buildings with numerous deficiencies that do not support modern law enforcement or appropriate accommodations for judicial services. A 2014 study concluded the facilities are a seismic risk, lack security, and are outdated for conducting effective and essential civic services.

In early 2020, the City purchased a building and property at 8804 Madison Avenue N for $8.975 million as the future Police-Court facility site. In April 2021, City staff postponed construction bid advertising for the retrofit of the 8804 Madison Avenue N building to wait for Blair King to begin his role as City Manager to lead the City through project delivery. The postponement of the construction bid advertising was also due to the ongoing City Council and community conversations about the costs of the project.

During the Sept. 21 City Council study session, City Manager Blair King restarted the process for a new Police-Court building with the introduction of the video above that highlights the deficiencies of the current Police and Court facilities.

Next Steps
On Jan. 25, 2022, the City Council will be asked to provide direction on a future Police-Court facility site. Staff will provide information on three potential locations for the Police-Court building on City-owned sites: the existing Police Station at 625 Winslow Way E; the Suzuki property at the intersection of Sportsman Club Rd and New Brooklyn Rd; and 8804 Madison Avenue N.

Staff will present an evaluation of the Madison Avenue building purchase and the implications for the sale or change in use of that property.

The staff memo and presentation materials for the Jan. 25 meeting are being released now to allow additional time for review (see the "Related Documents" section at right). 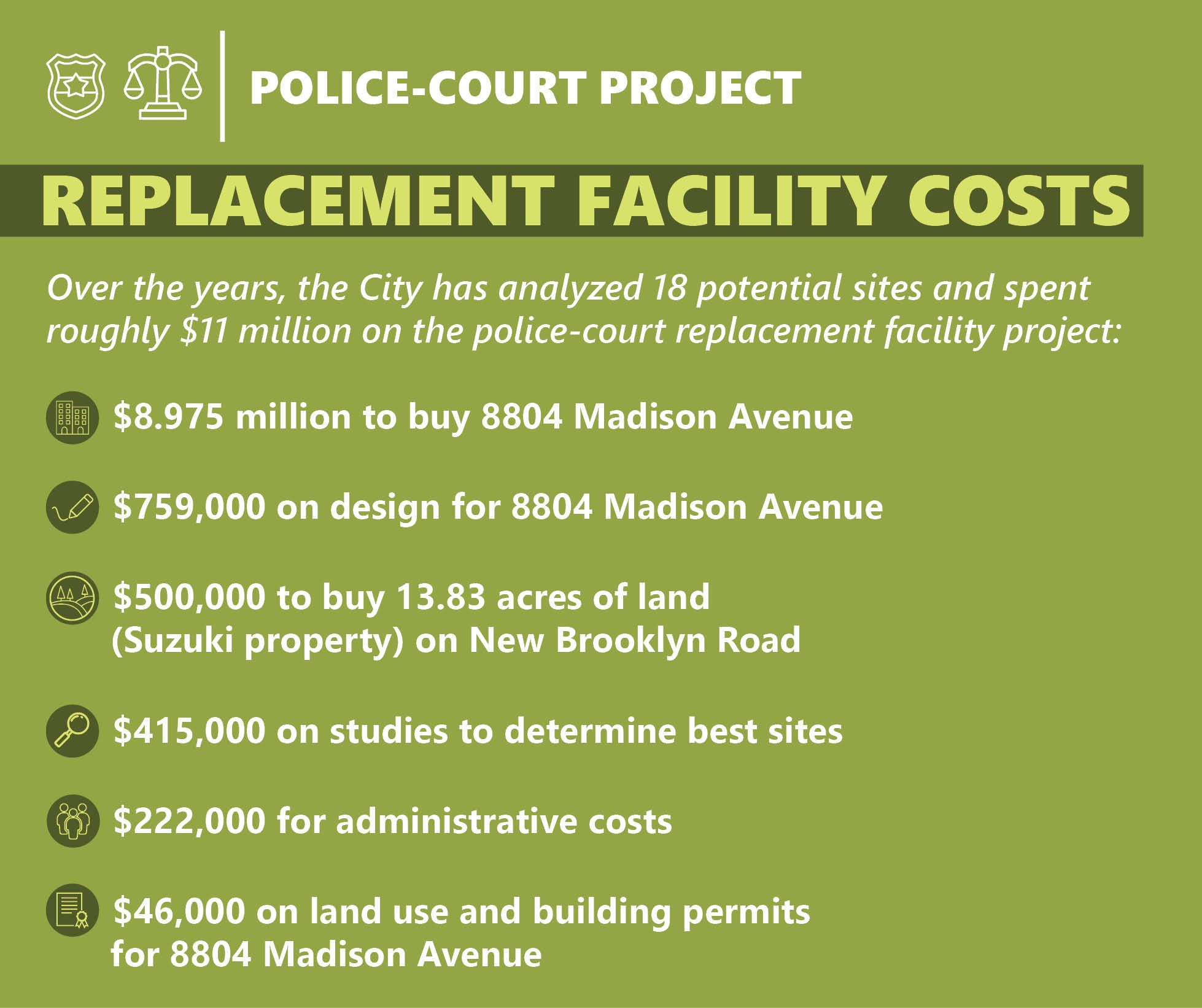 The City now owns three sites identified over the years for a new Police-Court facility. Learn about the sites below. 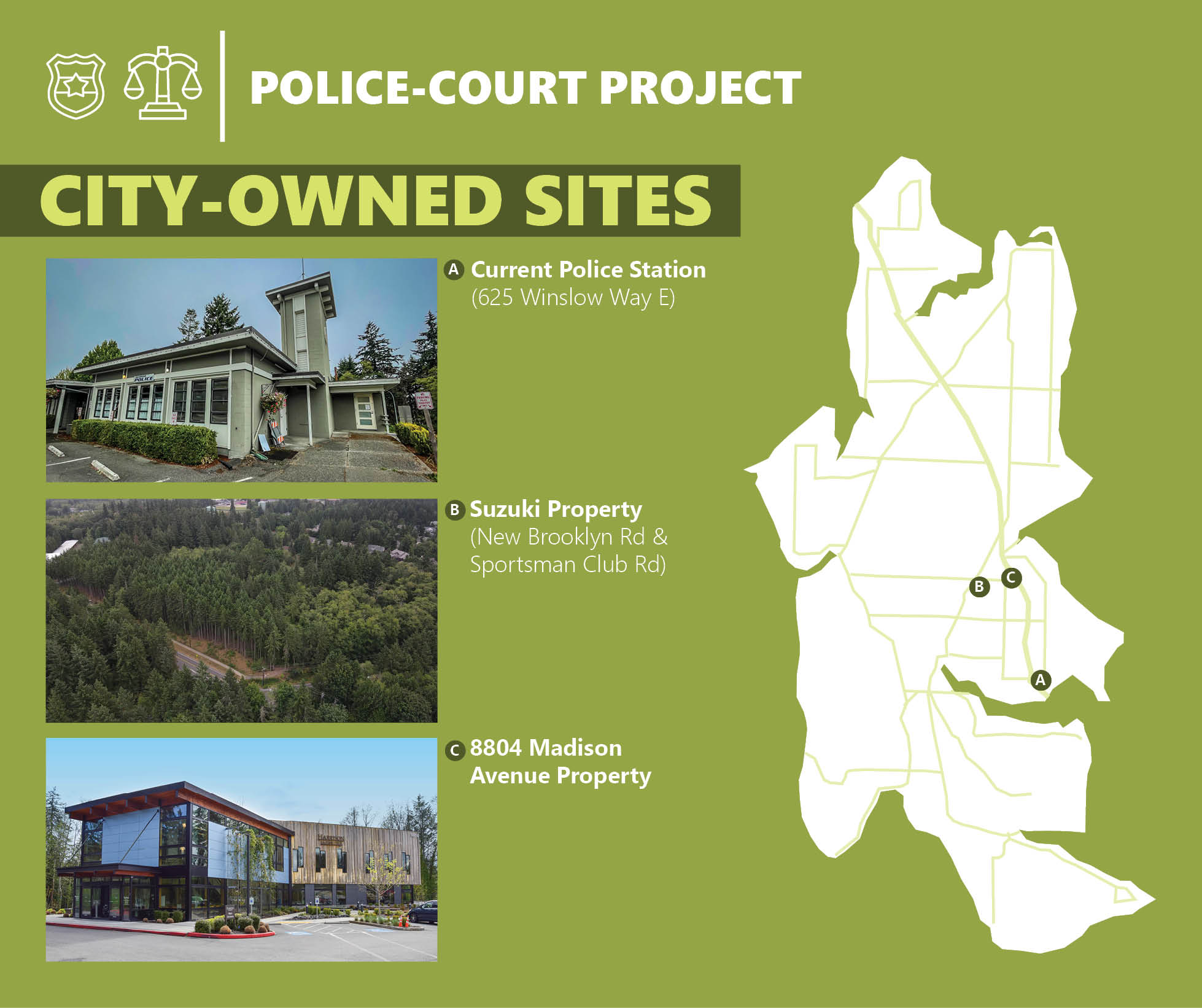 Existing Police Station
The current police station, located at 625 Winslow Way E, was originally built as a fire station in 1945. It later served as City Hall, then became the Police headquarters in 2001. The site includes 7,546 square feet of building and 0.89 acres.

Suzuki Property
In 2000, the City purchased 13.83 acres of land at the intersection of Sportsman Club and New Brooklyn Road for $500,000 to be the future site of the Police-Court facility.

8804 Madison Avenue
The City completed the purchase of the 8804 Madison Avenue N property for $8.975 million in early 2020. The property includes a 3.13-acre parcel and an existing two-story building with approximately 18,000 square feet of space. Based on construction designs completed in 2020, the approximate cost for the project, including property purchase and renovations, is estimated to be $20 million.

When the City purchased the Madison Avenue property, the Council approved the $20 million project budget to pay for the building and construction costs.

To pay for the project, the Council decided to use $12 million in existing funds and to issue $8 million in municipal bonds. Specifically, those bonds were issued to pay for the Madison Avenue building.

The City issued a tax-exempt limited tax general obligation bond. This type of bond allows the City to pay lower interest on the debt and save money.

Municipal bonds must be used within the scope they were issued -- as originally specified to the Internal Revenue Service and investors. Deviating from the scope may affect the tax-exempt status and have significant financial consequences. It could also damage the City’s ability to maintain its strong Aaa credit rating, which would increase the cost of future borrowing, including interest paid on debt.

The City of Bainbridge Island fully complies with Title VI of the Civil Rights Act of 1964 and related statues in all programs and activities.  Those requiring disability accommodations, please contact the City Clerk at 206-842-2545 or email.

Sign up to receive project updates. Select "Police and Municipal Court Building" from the Notify Me list.