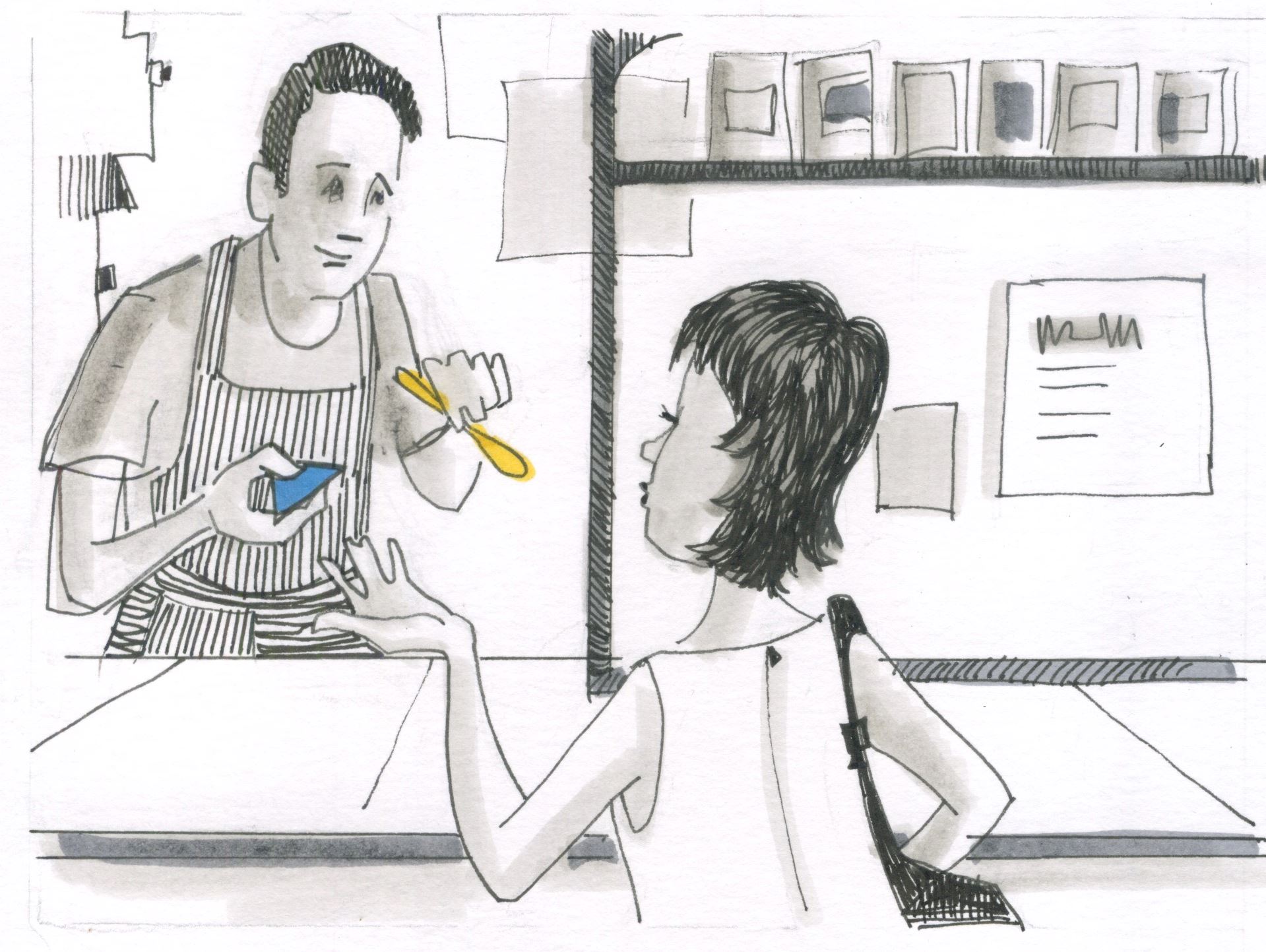 The Bainbridge Island City Council has set a goal to reduce greenhouse gas emissions on Bainbridge Island by 90% during the next 25 years. As an initial step toward that goal, the Council passed Ordinance 2021-18 that only allows single-use food service products to be provided when a customer asks or confirms they would like to use them.

The new regulations, which take effect January 1, 2022, will include the following changes for retail establishments:

The single-use food service items regulations adopted by the City Council amended Chapter 8.24 (Use of Nonbiodegradable Packaging Materials) of the Municipal Code.

To further support the efforts toward waste reduction and commitment to working with the business community, the City Council has established a Plastic and Waste Reduction Task Force consisting of Council members Joe Deets, Kirsten Hytopoulos and Leslie Schneider. The task force will also include people representing the business community and those with expertise in plastic and waste reduction.  The group will present recommendations to the full Council in the fall of 2021 with additional steps to reduce plastic and waste in retail food establishments on Bainbridge Island.

If you have questions about the new regulations, please send an email to climateaction@bainbridgewa.gov. 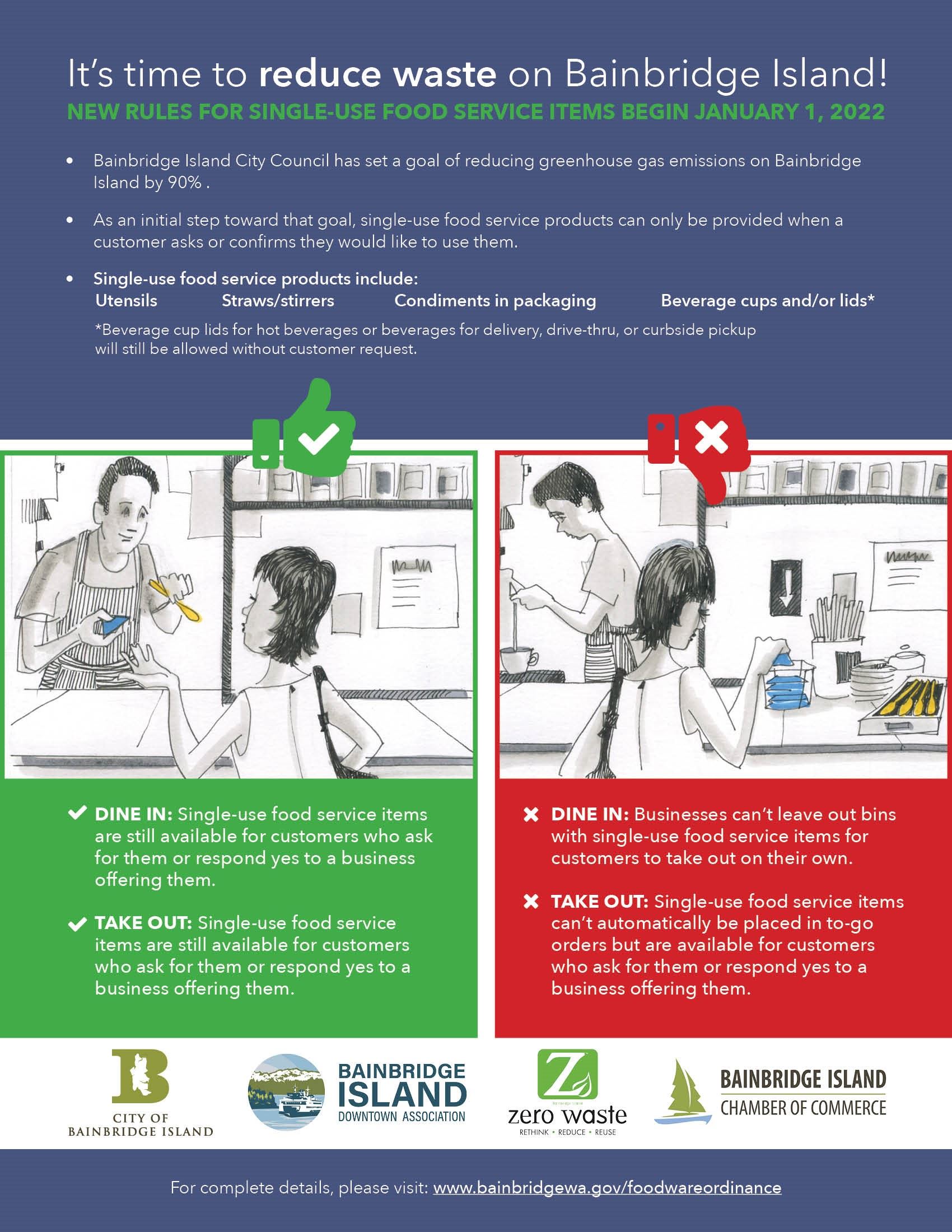 The CAP has three overarching goals:

Adaptation: Bainbridge Island is climate savvy, and can withstand the impacts of climate change.

The CAP contains over 170 actions and includes 18 immediate actions the CCAC believes are important to initiate over the next 12 months to help kick start implementation of the CAP.

Examples of the 18 immediate actions are to: 1) develop a “climate lens” that can be used by the City when making decisions; 2) hire a Climate Mitigation and Adaptation Officer to help in the implementation of the CAP; 3) develop a Clean Energy and Building Fund to provide resources to residents and businesses to make their homes and businesses more energy efficient; 4) develop a plan to transition the City fleet to all electric vehicles; and 5) develop an ordinance to ban single-use plastics.

The City and CCAC are planning two Community Meetings on Wednesday January 13th from 5:30 – 7:00 pm and Saturday January 23rd from 10:00 – 11:30 am.  The purpose of the meetings is to roll out the actions in the CAP and to answer questions community members have about the CAP.

The City of Bainbridge Island has a history of leadership in sustainable practices including:

In June, 2020, Resolution No. 2020-05, declared the existence of a Climate Emergency, reaffirmed the City’s commitment to Climate Action.

In January 2020, the charge for a retailer’s paper bags increased from five cents to eight cents to be consistent with the charge in the rest of Kitsap County as authorized by Ordinance 2019-30. In 2012, Ordinance 2012-06, the city approved the Single Use Carry Out Bag Ordinance (commonly known as the "plastic bag ban").

In 2017, Resolution 2017-20, the city expressed its commitment to the Paris Climate Accords.

In 2017, Ordinance 2017-13, the city established a Climate Change Advisory Committee

In 2017, Resolution 2017-04, the city expressed its support for carbon pricing policies

In 2016, Resolution 2016-11, the city acted to reduce use of neonicotinoid products on Bainbridge Island.

In 1996, the city ceased using chemicals for vegetation control along roadways.

In 1991, the city ensured that recycling facilities were available, affordable, and convenient to all residents to encourage reduced waste.

The quality of the environment we live in is an important part of what people often think of in relationship to the City of Bainbridge Island. Several of the City’s eight guiding principles in the Comprehensive Plan refer to the environment, including Guiding Principle #7 – “Reduce greenhouse gas emissions and increase the Island’s climate resilience.”

Recognizing the importance of addressing the issues surrounding the environment and climate change, the City has expressed its support through a number of ordinances, resolutions, and proclamations in recent years, as listed above.

In 2019, the City of Bainbridge Island (City) worked with Cascadia Consulting Group to complete a comprehensive greenhouse gas inventory (GHG) as part of the City’s commitment to understanding its emissions as one aspect of its response to climate change. Greenhouse gas emissions inventories quantify the amount of climate pollution produced by an entity.  As the City and Bainbridge Island community consider how to understand and reduce GHG emissions, this information will help track progress and inform decisions.

For more information, read the FAQs.