At their March 23rd meeting, the City Council approved $25,000 from the Transportation Benefits District fund to explore a scope expansion of the Madison Avenue Sidewalk project. The original projects scope, which is funded with a $1.4 million federal grant for design and construction in 2021/22, is for sidewalk widening on the east side of Madison Avenue between Wyatt and High School Road. The staff proposed that prior to beginning design of that project, that a larger scope be evaluated – one that would combine two other planned City projects, the Madison/Village Basin sewer improvements, and the Madison Road Reconstruction, and one project that is not yet planned, a separated bicycle facility on both sides of Madison from 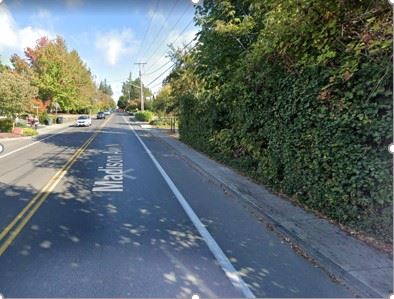 The advantage of combining and expanding the scope of these projects are that it would create cost efficiencies by overlapping utility and road replacements, and would also mitigate limitations on staff resources by focusing on a series of improvements along one corridor in a single project. Additionally, the separated bike lane element of the project would create an all-ages-all-abilities (AAA) north-south corridor through Winslow that could potentially connect downtown with the library, schools, parks, and other commercial establishments.

The staff will be developing scope options and project estimates for that larger project for Council and community consideration later this summer.  That work will also include evaluation of the cost-benefits of a AAA facility on Madison, versus other north-south corridors through Winslow such as Grow Ave and Ericksen Ave.

The staff is in the process of evaluating consulting firm qualifications, which will be used to select a consultant for the preliminary project planning and design.  Members of the Sustainable Transportation Task Force, as well as the general public, will have opportunities to weigh in on the project timeline prior to additional discussion with the City Council, which is planned for mid-summer 2021.

On July 7 - the City held a Virtual Open House meeting for the  Madison Avenue Walk & Bike Improvements at 4:00 p.m..
Click here for presentation materials and here for video.

Depending on the final scope, the project could proceed to construction in summer 2022 or 2023.

The City’s Capital Improvement Plan includes $2.08 million for the project design and construction (including staff project management costs), with $1.4M of the total from a secured federal transportation grant.

The City of Bainbridge Island fully complies with Title VI of the Civil Rights Act of 1964 and related statues in all programs and activities. Language services are available upon request. Those requiring disability accommodations and/or materials made available in alternate formats, please contact the City Clerk at 206.842.2545 or Email.