The Bainbridge Island City Council voted on Tuesday, May 2, 2017 to move forward with investigating the New Brooklyn site. This decision came after reviewing the Coates Design Analysis of the six potential sites and hearing public comments from the Open House held on April 12th. Unfortunately, the New Brooklyn site is no longer available for acquisition; therefore, the City is moving forward with investigating other sites.

HARRISON MEDICAL BUILDING
Site is located adjacent to SR305 and access is available from Madison Avenue N. at the intersection with New Brooklyn.

9657 NE YAQUINA AVE (link)
Site is located adjacent to SR305 and access is available from Madison Avenue N, which is a controlled intersection.

EXISTING SITE (625 Winslow Way E) (link)
In 2006, the Webber Study took a much closer look at the existing Police Station site. In fact, the purpose of the study was to determine if it is, in fact, feasible to develop a facility that accommodates the program. For more information on the existing site, see link.

See below links for appraisal results:

History of the Project

In Fall 2013, the City partnered with the Bainbridge Island Fire Department to issue an RFQ to qualified firms for an assessment of public safety facilities. The BIFD and COBI received presentations from four firms in January, and selected Mackenzie, Inc. for the project.

The project goal for the City was to understand the condition and limitations of the existing police station, to develop requirements for future facilities, and to identify design concepts for future facilities. The project generated information on the potential for a combined public safety facility (shared building), a co-located option (shared site/separate buildings), and a stand-alone Police facility.

The project included opportunities for public engagement, including three scheduled community meetings on March 5 (PDF), April 16 and May 14.

In April, 2014 the City decided to seek additional assistance from Mackenzie, Inc. to help review the feasibility of various sites for a potential stand-alone Police station, and to provide information on which sites could also support a new Municipal Court. This work was intended to supplement the original project and to help to narrow the options for a stand-alone site to a smaller set of best candidates.

On June 16, Mackenzie presented their report to the City Council (PDF). The Mackenzie study confirmed that the existing Police station has critical operational and safety deficiencies, does not meet "essential building" requirements, and is significantly undersized for the community's policing functions. The report provided a detailed assessment of the deficiencies of the current Police Station (PDF) and initial estimates for a stand-alone Police Station. The City has also received a detailed analysis of the feasibility (PDF)and estimated costs (PDF) for a BIFD-Police option.

The report also provided specific facility requirements Mackenzie had developed to help the City understand what facilities are needed to adequately support Police functions in the future. These were developed for both a stand-alone Police Station and for a combined Police-BIFD facility (to be located at the site of the current BIFD Station #21 - N. Madison Avenue). For both options, Mackenzie developed initial cost estimates based on facility requirements and community feedback regarding building aesthetics, scale and profile.

On July 21, the City Council, after receiving a report from Mackenzie, Inc., decided to move forward with a more thorough analysis of the two stand-alone Police station options, so that all three alternatives can be compared using equivalent information. On September 23, Mackenzie, Inc. presented the results from this additional feasibility study for the potential stand-alone sites (PDF). They also provided the results of a site ranking process adopted from the International Association of Chiefs of Police (IACP). In addition, the City worked to develop relevant information from our Police Department regarding our community response patterns (PDF)for calls for service and other operational impacts for the various site options.

In Fall, 2014 the City Council determine to move forward with consideration of sites for a stand-alone Police facility rather than a joint Police-Fire option. Several viable sites were identified, some of which could provide the opportunity to co-locate Police with other City functions. The City Council discussed potential sites at Study Session meetings on Nov. 4 and Nov 18, 2014

Discussions continued at meetings on January 20 and March 3, 2015. Over the last year, the City of Bainbridge Island has been assessing plans to replace the current Police station. Throughout the decision process, the City has considered a range of options. In May, the City Council had narrowed these options down to three potential locations for a stand-alone police including: north of the current City Hall, a property outside of Winslow adjacent to Fire Station 23, and a third site located on the Sakai property on Madison Ave N near High School Road and New Brooklyn. The third option is adjacent to the property that was recently purchased by the Bainbridge Island Metro Parks and Recreation District. 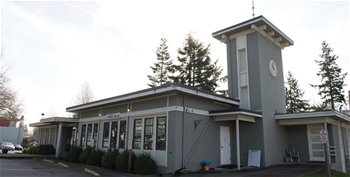 In the summer of 2015, the City Council identified the site north of the current City Hall as their preferred site for constructing the public safety facility. Bainbridge Island voters were asked to vote on a $15 million bond to replace the current court and municipal building, and develop an emergency operations center. The bond was not explicitly tied to the location north of City Hall. In October of 2015, while completing necessary due diligence for the purchase of a proposed site for a Public Safety Facility, located at 290 Madison Avenue North, City staff discovered that soil contamination exists in several areas on the property.

The City had been previously aware that the Department of Ecology had listed the site for future clean-up under the Model Toxics Control Act, based on soil contamination resulting from historical activities. The site had previously been occupied by a dry-cleaning business. The more extensive site assessment determined that the contamination may also have impacts on groundwater and air quality on and surrounding the property.

On November 3, the City learned that the proposition did not pass. At the Business Meeting on November 17, the City Council got the first opportunity since the November 3 vote on Proposition 1 to discuss the future of the public safety project. During the meeting the Council voted to no longer pursue the property at 290 North Madison for a combined public safety facility. They decided to not pursue any additional testing of the contamination located at the previously preferred site.

The City did complete additional testing to make sure that the contamination at 290 North Madison was not impacting the City Hall building. The test results indicated that there was no cause for concern for the health and safety of our staff and community members that utilize our facility. Overall VOC levels were very low, and no TCE or PCE was detected at any of the locations that were tested. A very small amount (0.6 ppb or 3 ug/m3) of 1,4-dichlorobenzene was found inside Suite 202. However, this is very common in commercial buildings, as it is found in many disinfectants and deodorizers. The EPA has also found it in many non-problem commercial buildings, in concentrations ranging from 0.3-85 ug/m3. The results that we received do not indicate a need to complete additional testing.