Initiative 976: Facts on How It Affects Bainbridge Island

Washington Initiative 976 (I-976), described as the "$30 car-tab initiative," is a ballot measure that would cause the City of Bainbridge Island to lose about $600,000 per year if passed by statewide voters during the November election. If I-976 is approved, among other things, it would result in the repeal of all local Transportation Benefit District (TBD) fees. For Bainbridge Island, the fees provide $400,000 for annual pavement repairs (asphalt repairs, chip sealing) and $200,000 per year in funding for traffic calming measures and expanding public transit services. Continue reading to learn more how I-976 would affect Bainbridge Island.


Washington Initiative 976 (I-976) is a ballot measure that voters will decide on during the state’s general election in November 2019. If passed, I-976 would reduce the state’s vehicle car-tab fees to $30 and limit funding for state and local highway, transit, and safety improvements.

What City of Bainbridge Island projects are at risk if I-976 passes?

Since 2014, the City has used, on average, $400,000 of TBD funds annually to support maintenance of the City's 140-mile road network- that's about 60 percent of the total spending for the City's annual road maintenance program. The annual road maintenance includes asphalt patching, crack and chip sealing, and large pavement replacement projects. The TBD also uses funding to acquire rights of way for sidewalks and bicycle improvements.

National benchmarks suggest that proper maintenance for a network our City's size should require an annual budget between $1.5 and $2.5 million, not including costs for reconstruction. The City of Bainbridge Island is currently able to provide less than $1 million annually for this work. Without the TBD funds, the City would need to pause road maintenance efforts, or redirect funding from other activities.

Why is road maintenance so important?

Road maintenance is a critical investment for the City, as the costs of not maintaining roads grows exponentially over time. For example, the City uses what is called a Pavement Condition Index (PCI) to rate the conditions of the road network.  Our current overall network score is 69 out of 100, but maintaining and raising that score to reach an overall score of 70 or more (our desired score) will take even more than the $400,000 per year that we are currently investing. This is primarily because as roads deteriorate from lack of maintenance, they reach a point where less-costly maintenance is no longer suitable, and more expensive repairs are needed. This is similar to a leak in your roof. If the shingles aren’t soon replaced when a leak is discovered, the drywall and rotted framing will also require replacing, adding a significant cost to the repair. In addition, when roads are repaired, vehicles are less likely to be damaged due to poor road conditions (potholes, cracks, or other road defects).

See table below for a list of Annual Roads projects supported with TBD funds.

In addition to funding for road maintenance, the City could lose an additional $200,000 in annual TBD funds recently approved by the City Council for future use. The City intends to use the additional funding for projects to slow traffic near schools and businesses and to expand public transit services through Kitsap Transit’s BI Ride service, which is a shared-ride service that operates on Bainbridge Island by both rider request and by serving scheduled stops.


How much is the current Vehicle License Fee?

The vehicle license fee (or TBD) for Bainbridge Islanders increased from $20 to $30 in January 2019 to support traffic calming measures and public transit services. It's important to understand the vehicle license fee is only one part of your car-tab's registration fee. There are other registration costs, in addition to filing and service fees. See graphic below. In addition, the City of Bainbridge Island offers a rebate program for income-qualified residents. 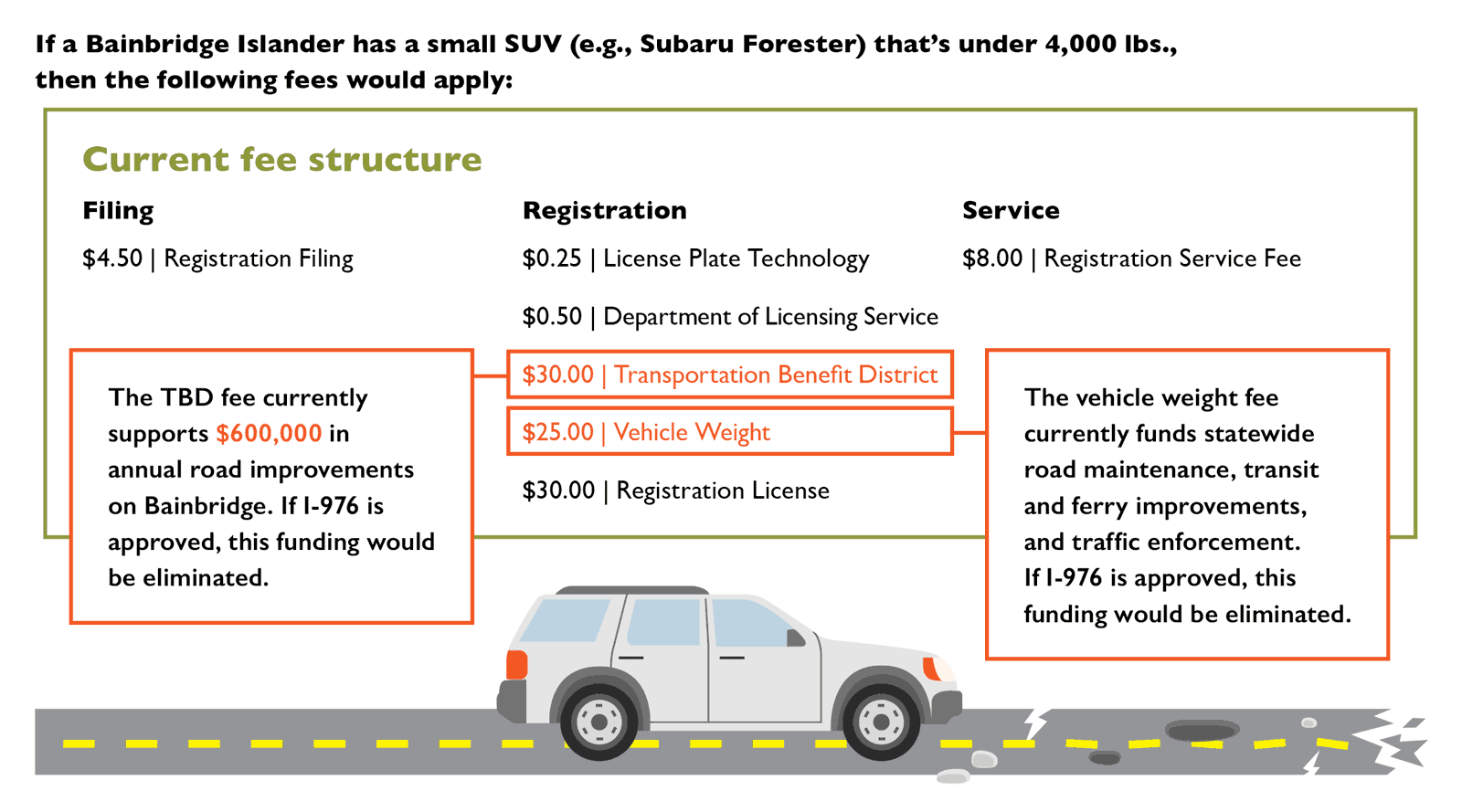 What does the initiative propose?


Regional Impacts: The Washington State Vehicle License Fees supports funding for major transportation improvements. The adoption of I-976 would reduce funding for highways, bridges and overpasses, transit, light rain expansion, ferry maintenance, and freight corridor improvements. At this point, the Washington State Department of Transportation (WSDOT) has not done an analysis to determine the immediate impacts to the SR 305 roundabout project if I-976 passes.

City Level Projects: The adoption of I-976 would reduce roadway improvement funds for 62 cities throughout the state, including Bainbridge Island. Overall, cities like Bainbridge Island, Seattle, and others in Western Washington would lose $60 million per year in crucial funding needed to repair potholes, upgrade safety, and expand public transit services.

Safety Projects: I-976's proposal to reduce license fees would reduce funding to fix unsafe roads, bridges, and overpasses. A 2019 report from the American Society of Civil Engineers graded the condition of Washington's Roads a C-. According to the National Highway Traffic Safety Administration, there were more than 560 roadway fatalities on Washington roads in 2017, many caused by poor road conditions.

Ferry Projects: According to WSDOT, the passage of I-976 would reduce funding for ferry vessel improvements and construction by $1.3 billion by 2031.

To learn more about the fiscal impacts of I-976, please read more from the Washington State Office of Financial Management.