Olympic Drive is one of the busiest roads on Bainbridge Island — it's how most people travel to and from the ferry. The City of Bainbridge Island designed a project along Olympic Drive to improve safety for all users — people who walk, bike and drive. Wider sidewalks, new bike lanes and other non-motorized improvements will ensure continued safety and accessibility to and from the ferry. The project is expected to be complete in November. The following information and graphics will help all users understand many of the new improvements.

What do people walking need to know?

What do people biking need to know?

What do drivers need to know?

What are the changes on Winslow Way near Cave Avenue?

If I’m riding a bike west on Winslow Way (near Cave Avenue) and approaching a red light at the intersection, do I ride ahead of the cars already at the stop light to get inside the bike box?

Why are there bike lanes in the center of the road?

Why did the placement of the “stop bar” in the southbound lane of SR 305 at Winslow Way change? 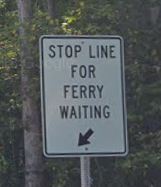 A sign ("Stop Line for Ferry Waiting") was placed near the new stop bar to let ferry passengers know where to stop when there’s a red light.

Will the City be monitoring the changes?

Everyone should do their part to keep the roads safe. The safety of bicyclists on the road is a responsibility shared by both drivers and bicyclists. All bicyclists have the same rights, duties, and responsibilities of a motor vehicle driver. Motorists and riders who do not obey traffic laws can be ticketed. (Source: Washington Driver’s Manual – 2019)

TITLE VI:  The City of Bainbridge Island fully complies with Title VI of the Civil Rights Act of 1964 and related statues in all programs and activities. Those requiring disability accommodations, please contact the City Clerk at 206-842-2545, or email.