Description
The City of Bainbridge Island will increase the number of residential moorage sites in the Dave Ullin Open Water Marina (DUOWM) in Eagle Harbor from 11 to 16 due to increased demand. This is allowed under the terms of the City’s lease with the Washington State Department of Natural Resources (DNR).

The layout decision was approved after months of discussion at City Council meetings to determine the best way to address the needs of both the liveaboard community and recreational users.

The lease area is known as the Dave Ullin Open Water Marina in honor of a beloved resident of Eagle Harbor who died in 2017. 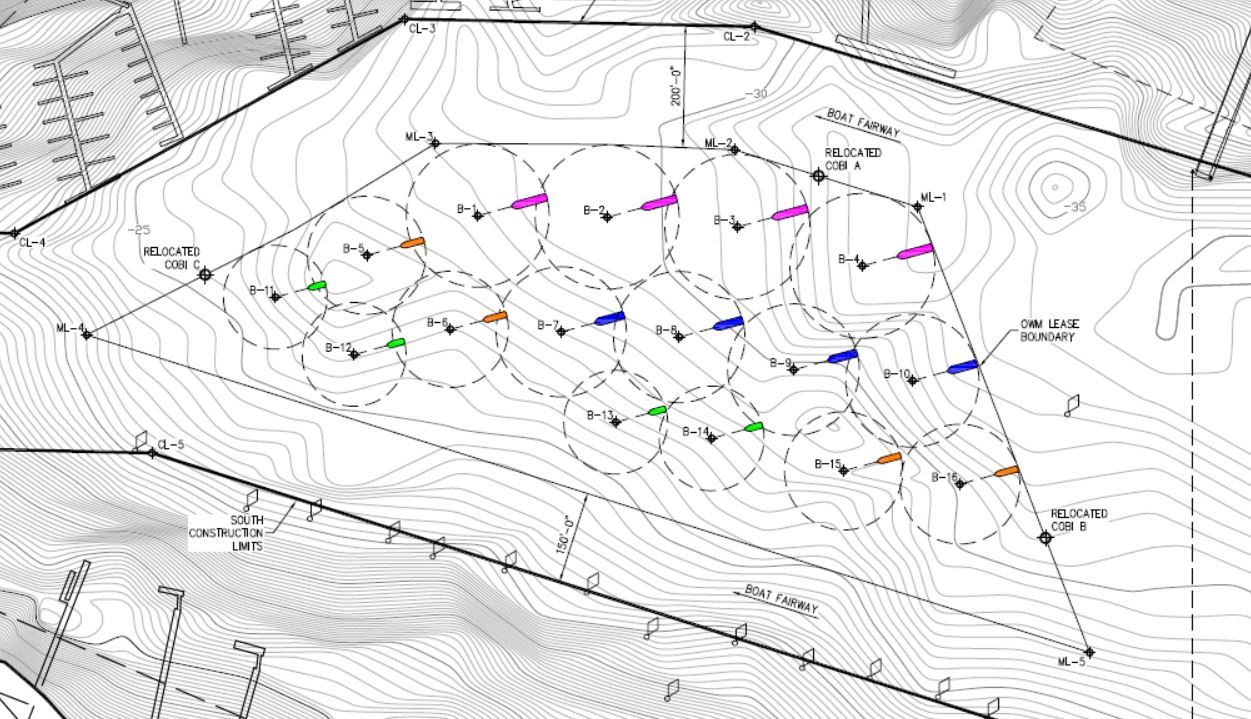 Week of Dec 30: PND Engineers, a consulting engineering firm, has approved the inspection and testing of the 16 buoys in the City’s Dave Ullin Open Water Marina (DUOWM). The project is sufficiently complete with minor signage items and private buoy relocations remaining. Tenants will soon be relocating to the buoys within the DUOWM.

Week of Dec. 16: The Contractor has completed load testing of the anchors to 10,500 pounds for 60 seconds and all 16 anchors passed! This week, the contractor is now assembling the mooring hardware to the anchors and providing an inspection video and will provide a video documenting the installation to the Engineer. It is estimated that the completion of the project and acceptance by the Engineer will occur by the week of Dec. 23. At that time, tenants will be allowed to use the buoys.

Early December: The Contractor is working to load test the anchors to obtain 10,500 pounds for 60 seconds per the project specifications. The Contractor will be using extensions to drill the helical anchors deeper, with greater torque until the desired results are met.

Week of November 4, contractor to begin installation of  the new helical anchors and buoys.

Week of October 28, contractor continued to remove the anchors/buoys including city regulatory buoys and one private buoy and started marking the new buoy locations.

Week of October 21, contractor removed 9 of the 10 helical anchors and buoys within the marina.  The helical anchors removed were 25-feet in depth and had three helices.  See anchor removal picture under "Related Documents" as well as design plans.

During the project, there will be days with little or no activity on the water as the contractor works with subcontractors to assemble materials. The project completion is expected around Friday, Nov. 15.

Liveaboard tenants will be temporarily relocated to the city dock beginning Saturday, Oct. 19.  Spaces for guest moorage will still be available.

Funding Source
On Aug. 27, 2019, City Council approved the construction contract in the amount of $135,923. from the General Fund.

How to Stay Informed
Sign up to receive updates on the DUOWM buoy layout project through Notify Me, a free service that allows you to subscribe to topics of interest. Select Dave Ullin Open Water Marina Layout/Design Project.

Jurisdiction
By Washington State statute, the City of Bainbridge Island has jurisdiction over all the waters of Puget Sound surrounding the island to a distance halfway to the land on the other side (RCW 35.21.160). Authorized use of state-owned aquatic lands is mandated by RCW 79.100 and WAC 332.30 governs how to receive authorization for that use.

TITLE VI NOTICE:
The City of Bainbridge Island fully complies with Title VI of the Civil Rights Act of 1964 and related statues in all programs and activities.  Those requiring disability accommodations and/or materials made available in alternate formats, please contact the City Clerk at 206.842.2545 or cityclerk@bainbridgewa.gov.